Since we left Ireland in March 2020 on the cusp of the pandemic, my heart has yearned to return. And now we have! Armed with my recently acquired Irish citizenship (through my maternal grandmother who was born here), we are here for three months of fact-finding, to discover 1) if we want to settle down here, and 2) if yes, where on this gorgeous island.
When we were planning our trip, we chose Cork City as a base. It’s the second-largest city in the Republic, and far less expensive than Dublin. So here we are, in a little flat in the city centre. I can hardly believe we’ve already been here for nearly six weeks.
Though we quickly decided Cork City (not to be confused with County Cork, of which Cork City is the “County town” or main town) is not “our” place, we have found it to be a good base to explore the southern part of the Emerald Isle (which we didn’t get to last trip).
Of course, wherever we are, our first mission is to get out on foot and check out the vibe of the place. The first historic site we visited is the Cork Gaol (prison). A combination of Governor’s home and prison in the 19th century, it also served as Cork’s first radio station from 1927 to the 1950s.
Jim also came across the Nano Nagle Center (Nano Nagle was a nun who founded her own order and ran secret schools for the poor children of Cork in the 1700s), which is aptly described as “an unexpected oasis” in Cork City. The museum wasn’t open the day we went, but we enjoyed the grounds, and Nano’s tomb, placed in front of a soothing water feature, is a beautiful tribute to this amazing woman.
We took a day trip to Cobh (pronounced “cove”) and I dragged Jim to the fascinating Titanic Experience exhibit. Cobh is famous as the last port of call for the Titanic, and they have turned the original White Star Line ticketing office into a museum. To this day, Cobh, previously known as Queenstown, is a major harbor and embarkation point for many thousands of Irish emigrants. I found myself wondering if my grandmother passed through here on her journey to the U.S. as a six-year-old child, accompanied by a mysterious aunt.
The cities and towns are fine, but the true majesty and magic of Ireland is to be found in the countryside. In mid January, Jim booked an incredible Airbnb near the southwest tip of County Cork with a first for us: NO wifi! We gifted ourselves with four glorious off-grid days at a cottage on the private farmland of Three Castle Head overlooking the Atlantic Ocean, and soaked in the incredible natural beauty of the wild sea, castle ruins, prehistoric stones, mountains, charming villages and tiny, winding roads. We explored the ruins of the Dunlough castle/fort that are on the private property of Three Castle Head. We saw a fat seal and the incredible bridge and cliff/ocean views from Mizen Head, the most southwesterly point in Ireland. We drove the Sheep’s Head peninsula and hiked to see the Sheep’s Head lighthouse. And straight up fell in love (again) with the Irish land.
Last weekend we headed to Blarney Castle and Gardens, which was so amazing it deserves its own post… coming soon! I’m pretty much dying to do a wedding there! 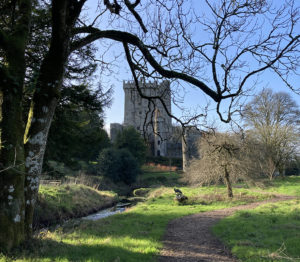 We’re generally just so happy to be back in Europe! Love the walkability. The markets where you can get vegetables, bread, olives, all kinds of cheese, meat (for Jim!)… all local and all  so incredibly fresh. I love the different flowers, plants and trees… right now there are huge and happy primroses in every color of the rainbow, snowdrops (which I’ve never seen in person!), and gorgeous lenten roses.
Before I wrap up this post, let me address the burning question on everyone’s mind: doesn’t it rain all the time?
The answer is, yes… we have yet to see dry pavement, LOL. It’s pretty much mostly cloudy most of the time, and it will definitely drizzle at least once, if not multiple times nearly every day. However, it’s not that it rains all the time. Or even very hard, though we have had a couple of storms (or gales, as they are called here). The sun comes out quite frequently, somewhat to our surprise. The sheer variety of clouds is a joy to watch. And the best part?
SO many rainbows! 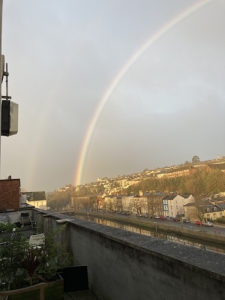 Perfect symbol for our bridge year of rest, recovery, new adventures, and finding our way.
Tomorrow we head to Dublin for some fact-finding there, plus a housesit. In March we’ll shake loose of Cork, and spend some time (along with Jim’s mom Lia) in Galway as well as Dublin again (check out the calendar for more details).
Here’s to a beautiful journey in 2022. It’s already been amazing!
xo,
Daria and Jim

Where we are, and what's happening in our lives. Trying to fit it all into three bags so we can keep moving.