Hello friends! We know, we know – it’s been a while since our last post. We spent most of December in Washington, DC – it was Jim’s first time, and we had an amazing time!
We stayed in a neighborhood in north Silver Spring that was literally in a national forest. Tons of deer, foxes (allegedly…we never saw one, unfortunately), eagles and owls and ravens, and NO streetlights. It was beautiful and very restful. Plus, the homeowners kindly allowed us to eat their abundance of fresh fruits, vegetables, eggs and bread from their local CSA. So delicious!
It was so easy to take the Metro (which I must say is much cleaner than the Connecticut and New Jersey trains or the NYC subway!) into the city to play tourist. The first time we went in, we toured the National Air and Space Museum, which is super cool because of all the historic airplanes and spacecraft on display. My favorite parts were the exhibit on the Wright Brothers and a section on Charles and Anne Lindbergh (Gift From The Sea is one of my top 10 books, and I really didn’t know how much time she spent flying all over the world with Charles as his navigator), and Jim loved the incredible sense of history.
We made time to go in once more the day before we left. I was moved to tears at the Lincoln Memorial, and we felt like real Americans after viewing the originals of the Declaration of Independence, Constitution and Bill of Rights at the National Archives. We didn’t make it to the American History Museum or the Library of Congress…oh well, next time! 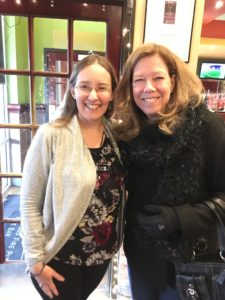 Some of our favorite trips are the ones where we get to spend time friends and family, and that’s part of what made our DC stay so great. I connected with a good friend of mine from Atlanta who now lives there (that’s Allison in the photo at left), plus two school friends. Jim had the chance to do some networking to promote Archetype Technology, and we also got to see Jim’s stepmother’s brother.
Part of my schoolwork includes volunteer work, and I had the chance to work a shift at one of the largest food banks in DC, sorting and packing canned goods that they’ll distribute throughout the year to seniors and families throughout the area. There’s such a need, and the local community really steps up to help, through donations and through volunteering. It was such a cool experience because I’ve always been big on donating but I never saw what goes on beyond the scenes. I’ll definitely be looking for other food banks to work at during our other stops this year! (Thanks Mom, great idea!)
In between all that, we had a wonderful time hanging out with our canine charges: Hunter, Carly and Tzimmi (and a very loud bird, Birdie). We do love the pups! They were quite the crew – all with very different personalities. Hunter is super focused on whatever he’s doing in the moment (mainly eating or begging you to throw the ball). Tzimmi is still a puppy and is the little brother of the bunch, always wanting to do what the big kids are doing. He’s a sweetheart and loves to be up on our laps. Carly is our secret favorite. She’s a senior pup and the queen bee of the household. We decided she and Sylvie would have been fast friends. 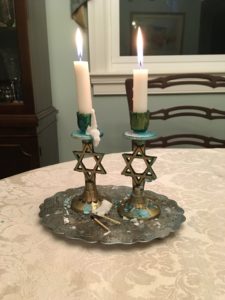 The other great thing about this house is that the homeowners are Orthodox Jewish. Not only did we light the Sabbath candles on two of the Friday evenings, we also got to light the menorah for the eight days of Hanukkah. It was fascinating to practice some of the traditions I learned about in school last year when we were studying the different major religions.
After another relaxing stop at Team Reed’s house in Raleigh (thanks, Jace and Josh!), we rolled into Atlanta just in time for Christmas. Team Reed arrived a couple of days later, and we’ve been having a wonderful time hanging out with all the kiddos and my mom. Looking forward to trips to Augusta and Gainesville this weekend to see Lia and Linda, as well as our 17th wedding anniversary (what, what!?) and some dinners with friends before we head back North again after the New Year. A wonderful cap to an incredible year!

Where we are, and what's happening in our lives. Trying to fit it all into three bags so we can keep moving.