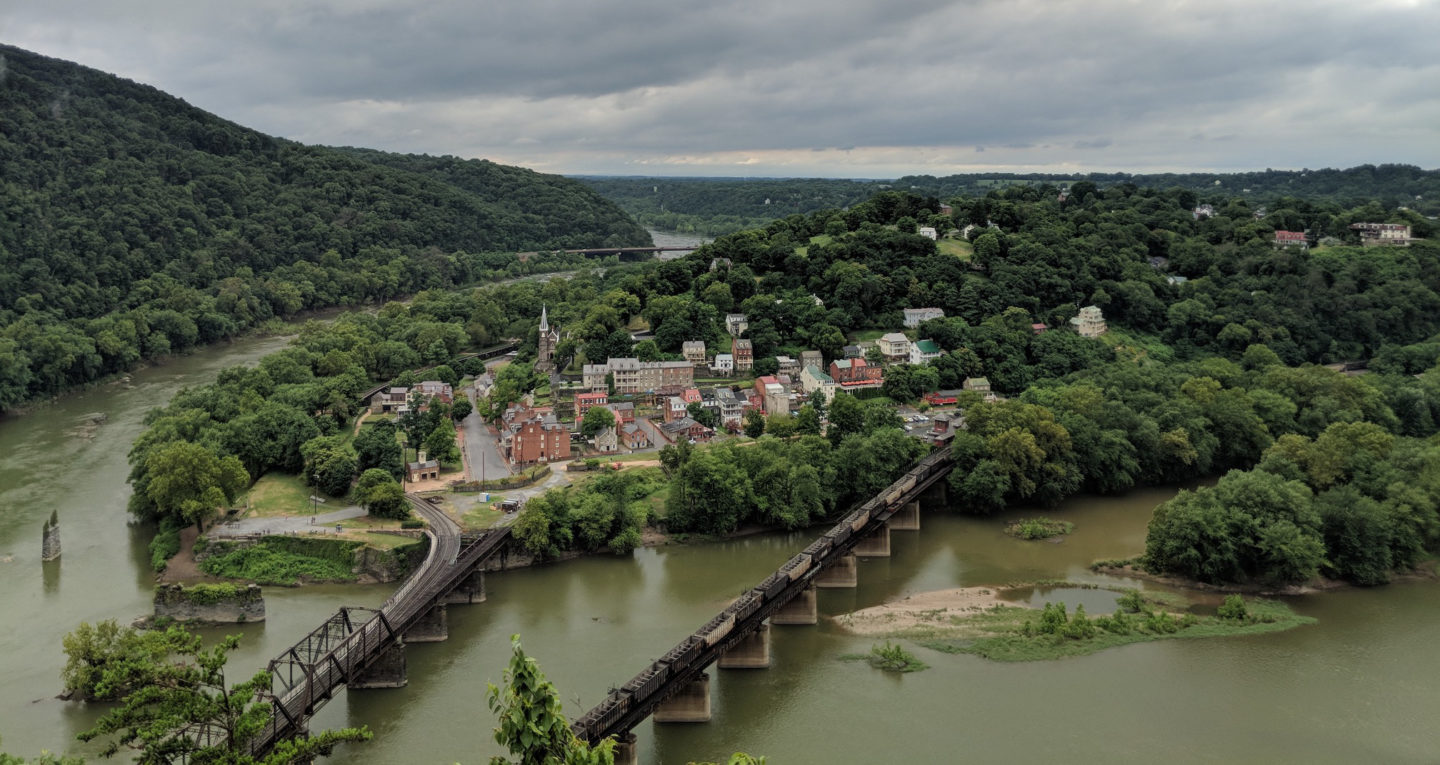 Harpers Ferry and Bolivar (named in honor of that Bolívar) are essentially the same town and sit where the Potomac (above, right) and Shenandoah (above, left) come together. Mr. Robert Harper purchased the land on the prospect of the confluence turning into a big deal commercially. And this was the case for a time. It was a strategic location for the U.S. military and housed a musket manufacturing facility as well as a long-time armory. It was also a major hub of river traffic with dedicated canals that were part of a system George Washington was the driving force in constructing (the Patowmack Canal).

Looking at it today, the bad luck of many floods (at least 82 since the mid-18th century) effectively did the town in. Well, that and the Union and Confederate armies worked very hard at killing each other in the town and surrounding areas. The flooding problem makes me wonder how a city like New Orleans kept its legs. I would suppose it has something to do with exactly how much business a town generates.

While we're in town for a week, the thing to do is wander about. It's a generally historic area, and everything is right on top of each other. The shortest of walks come with hilly terrain, but if we pace ourselves, I figure we'll be OK. We head in see what's to see where the two rivers join together.

Here are some pictures of Harpers Ferry proper - Daria and I agreed that the pictures don't do justice to exactly how steep the walking was. The stairs below were carved out of the natural rock and lead to a Catholic church that pre-dates the Civil War.

If you ever find yourself walking the full length of the Appalachian Trail, it will take you right through Harpers Ferry - there are white flashes that mark the trail all through the town. One can be seen on the lamp post on the right of the third picture below.

And They Kept Walking

If you keep going through Harpers Ferry, you'll come straight to the confluence of of the Potomac and the Shenandoah. Which is beautiful, if uneventful. As we stood there taking in the rolling waters and surrounding mountains, we couldn't help but notice the abrupt cliffs on the Maryland side of the river opposite Harpers Ferry. Every now and then, there'd be a human figure seen walking the edge of those cliffs.

So now I'm thinking to myself that it'd be nifty to see the town from that overlook, but I'm no dummy - that's quite a hike for Daria and I. It's been off and on raining, and the temperature is in the mid-70s so I figure we have that working for us.

Let's give it a shot.

There's that famous phrase from Laozi, about a journey of a thousand miles and not stepping too fast in order to not kill oneself. Something like that. Well, that applies here. Full confession, I didn't tell Daria that I'd intended us to walk to that cliff on Maryland Heights. Once I saw it from the confluence, I just started that direction. Now, in my (self-) defense, when we reached about half-way up the mountain I did let Daria decide whether we continued.

It could have gone either way, but she decided that we'd press on. And frankly, at that point, I'd have been OK with turning the ship around. Middle-age does have a way of catching up with you.

I realize now after the fact that the pictures I managed to snap of the trail itself are the easiest parts. Which makes some sense. When you're navigating a hundred foot stretch of steep rocks that are all the remain of a washed out trail, taking a picture is somewhere behind all those things going through your head to keep you from falling over.

As we approached the cliff, we could see glimpses of the promised view. And the foliage eventually fell away to reveal quite the site of Harpers Ferry below. This terrain was occupied by both the Union and Confederate forces as the battle raged over who would control the area. With multiple batteries of cannon, it was easy to empathize with the soldiers who had to haul the machinery up there - if not the horrors of one of the first wars on an industrial scale.

The walk down, as those who have hiked mountains before know, was not any easier than the hike up. Traipsing down the same uncertain footing you passed on the upward climb carries its own challenges. But it does have the psychological advantage. Both in the awareness that it will all be over soon as well as the accomplishment of the effort that lay behind us.

2 thoughts on “Around Harpers Ferry”