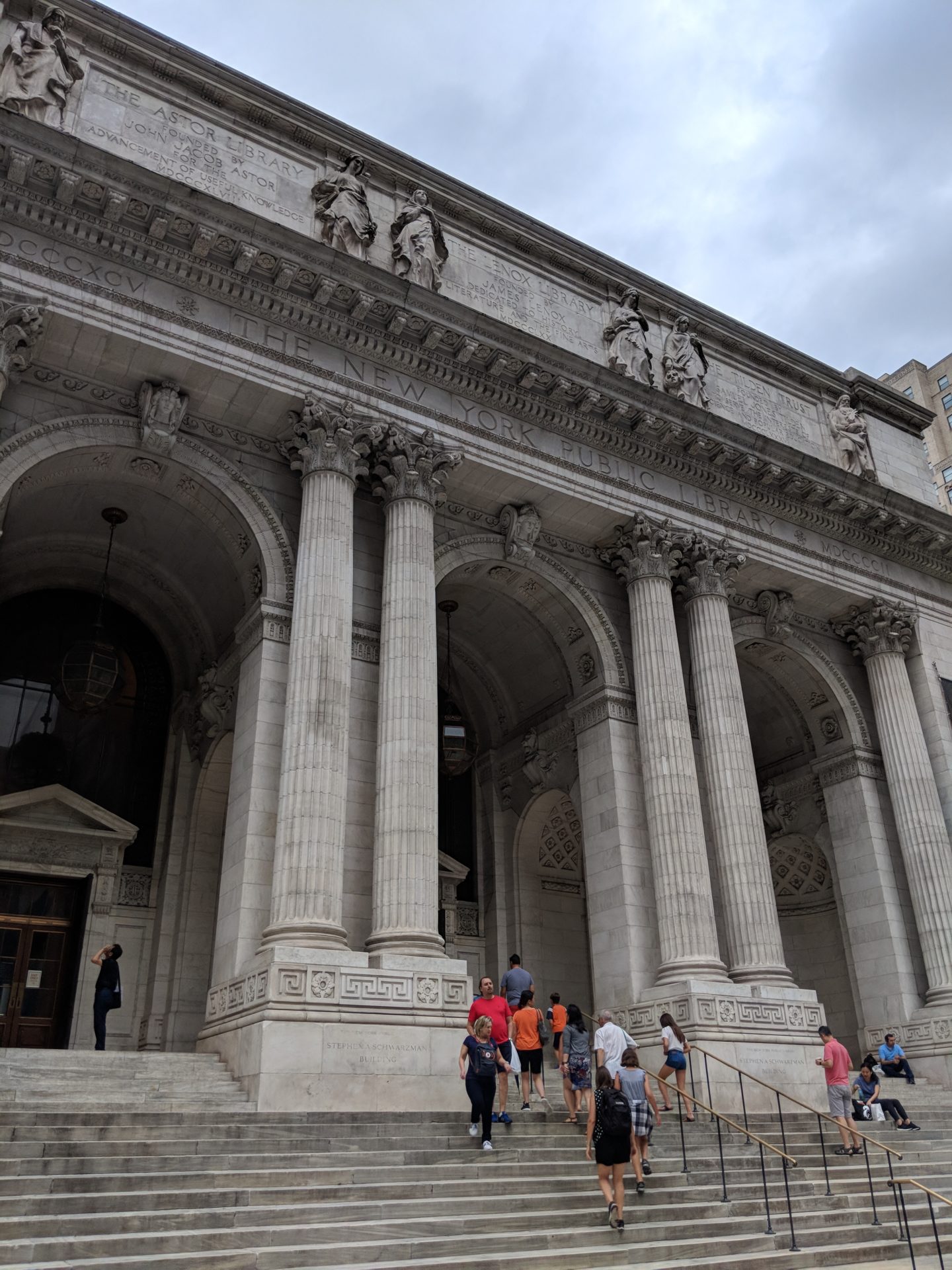 This is at least the second time we’ve done this – pack-up our laptops and grab the 50 minute train commute into the city (before we even arrived in the area, we were expressly told not to call it “New York City” – just, “the city”) for a day of remote work. It’s a mix of a normal work day and day trip adventure.

When we moved up here, we looked at a place in the city but ultimately chose the Stamford area. Mostly because we couldn’t imagine living in less than 1000 square feet. How things change…

First order of business getting off the train is to find a spot for second breakfast. I don’t know about you but a 0530 wake-up puts me a bit peckish around 0900. Daria’s seminary classes bring her into the city much more than I get a chance and she’s a big fan of Maison Kayser – so that’s where we went.

The mid-Manhattan branch of the NYPL is an incredible array of architecture, books, historical maps, periodicals – pretty much everything you might expect in a turn of the 20th century American library.

The building was built where a city reservoir once stood. If you visit, you can self-tour with a head-set (recommended!) which will give you interesting insights into the different rooms, historical benefactors, and the architecture. Part of the tour will take you to the basement where part of the original reservoir can still be seen. It reminds me a bit of the Museum of Barcelona History where you can see the layers of that city going back to Roman times.

Working in the library is perfect. Pick your spot in any of a number of rooms that are differing levels of quiet. There’s great wifi and power outlets everywhere. For someone like me who likes a bit of white noise, the comings-and-goings of people and the shuffle of books is a sweet spot. Or, bring a pair of noise-cancelling headphones if you like.

Admittedly, one of the best reasons to remote work in the city is the food options. The city is famous for the chance to get any food at any time of day or night. While I find that to be an exaggeration, at 1:00pm on a Friday afternoon, the choices are wide-open.

When we’re in midtown, Joe’s Pizza is the place we like to grab a slice. It’s touristy, but the pizza holds its own. You’re equally likely to find a family from Jackson Mississippi in wide-eyed wonder as you are a 6′ tall woman model dipping in for a slice on a paper plate as she legs it out to her next session.

Which reminds me. Important safety tip in the city: do not stop in the middle of a Manhattan sidewalk. The flow is fast (well, except for that family from Jackson Mississippi). Stopping to check directions on your phone, look up at buildings, or look in a window without stepping out of the flow is asking for trouble.

Around the corner from Joe’s is a ramen bar called Tonchin. We popped in after Daria had her slice and I had my lunch of “Tan Tan” ramen – which was just incredible. Spicy, umami goodness.

Comings and Goings and the Way Home

After a (half) day of work, and some choice eating, we packed it up to grab the 4:05pm train back to Stamford. Looking back now, I wish I’d gotten some pictures of that commute because the train was jam-packed. The unfortunate guy straight ahead of us was caught sitting next to a more-than-tipsy talker who, for at least the 50 minutes we were on the train, dumped his whole life story. Most of the time, it’s a peaceful ride but you roll the dice and you take your chances.

With a short time ahead of us left in Stamford, I’m not sure we’ll get many more opportunities to work in the city. But it’s nice to know if I find myself in the neighborhood, a great space to do actual work is right there for anyone.

2 thoughts on “Remote Work in the City”